Your browser is old and is not supported. Upgrade for better security.
20
Wefunder

Since our last investor update, we hired 17 new team members and solved many of the operational problems that constrained our growth in 2017.

In Q1 2018, while we focused on recruiting and training the new team, most of our metrics declined month over month. However, in Q2, after the new team was onboarded, we quickly re-accelerated growth and hit new all-time highs.

In Q3, we intend to grow at least 20% month over month. With the larger team, we're operating at a loss, and expect to re-achieve profitability in September.

The most important impact of our larger team is that we now have the resources to innovate again, while growing. Our user-facing product stagnated over 2017 as we struggled to automate an overwhelming operational workload. Now, we have enough humans to do the core job, with enough capacity to work again on product innovation. Some major improvements will be rolling out soon.

There are also several regulatory improvements that we expect will hyper-charge growth, including the Fix Crowdfunding Act and the recent Tax Reform Bill.

We're also asking our investors for help in getting a secret project off the ground.  Scroll to the end for more info.

Number of Investments. Our number of monthly investments - after a slowdown in Q1 - accelerated to hit an all-time high in May. 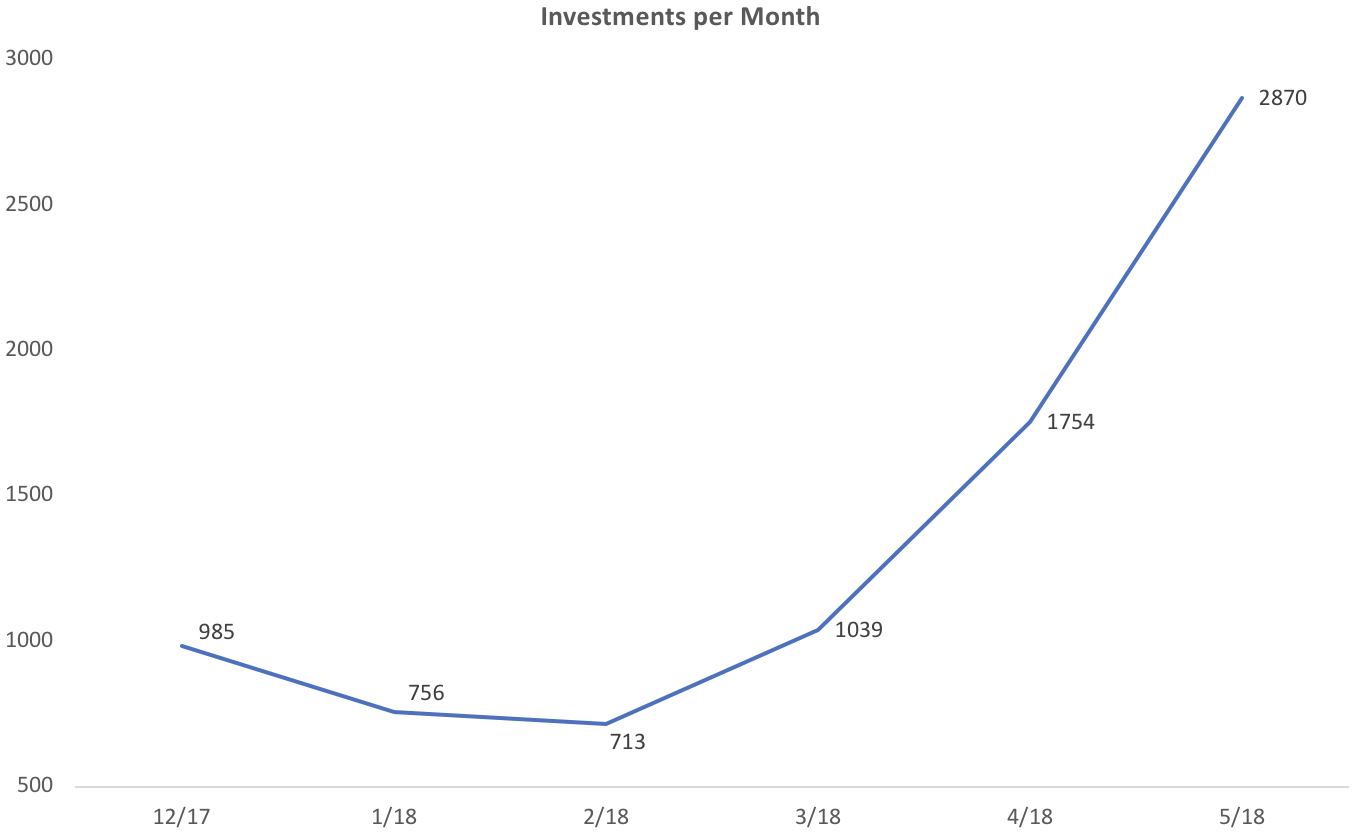 Market Share. Our market share has decreased as we paused to fix our operations problems, but we are the largest funding portal. We believe our much stronger team - and the features that will soon be rolled out - will soon increase our lead and market share back to where it was in 2017.

New Companies in Pipeline. A leading indicator of our future growth are the number of "full-service" companies that we add into our launch pipeline. It takes 4-6 weeks to launch a company after they are added into the pipeline. Our incremental cost of acquisition for the 31 companies in May - 2X our past high - is close to $0.  We still do no marketing or advertising.  We've focused on referral partners, freed up Dylan to fix our sales process, and hired Jonny Price (former head of Kiva US) as Director of Business Development.

Returns. We never lose sight that our long-term success will be tied to ultimate investor returns, not simply funding volume.  So we've released all of our returns at https://wefunder.com/results, and will update it as more data comes in.

My favorite part about Wefunder are the awesome humans I'm surrounded by. Since the last update, we've recruited 12 new full-time team members and 5 full-time interns.  Our team has grown 3X in the last 9 months.

Since the last update, one team member has left an active role. Mike Norman stepped down as President of Wefunder in February, but is still with the company.  He's currently on sabbatical for the foreseeable future, taking some well deserved R&R after 6 years of a grueling startup grind. He played an integral part in recruiting and onboarding the new team, while gradually handing off his responsibilities.

The market size for equity crowdfunding is still small. Thankfully, there are regulatory changes on the horizon that are expected to expand the market.

We could use help with:

We'd really appreciate any help on this project.  Please email me at nick@wefunder.com if you have any thoughts or connections you think we'd find useful.

Liked by Gary Harper, Collin Baptiste, Ankita Tiwari, and 27 others